Listen to the 3 minute introduction read by the author.

There were once three companies.  The first had a brand new JIRA instance that was smartly set up and implemented.  Everything was carefully planned and executed.  The projects, issue types, workflows, and other settings were standardized and built for needs of the users.  All the configurations and processes were documented and the users were well-trained.  The transition from an old issue tracking tool was simple and all the users were happy.  The application was pruned and maintained like a beautiful garden.  Its administrators were carefully selected process leaders who routinely cared for and meticulously shaped the garden’s growth.

The second company had the complete opposite set up.  Their JIRA instance was old and it had not matured and changed in tandem with the organization.  There were no standards, no recognizable patterns, and no documentation.  There was a free-for-all mentality that resulted in an overgrown swamp of data.  Anyone that desired a project customization was instantly made an application administrator and made any change they wanted.  Changes were made without a strategy and without regard for their impact on other projects or the application as a whole.  The swamp became more and more unmanageable each day.

The third company wanted JIRA to look and act like all their other internal applications.  They spent many months making visual and functional customizations.  Eventually, so much had changed that they couldn’t upgrade without wiping out all the custom elements.  Their users weren’t able to take advantage of all the new features and functions available in newer versions.  One by one their add-ons became unsupported and their application reached the dreaded “end of life” support status.

The recommendations in this book are a result of working in these environments and digging them of the swamp.  Included are best practices, dos and don’ts, and recommendations you can adapt to fit your company.

Would you rather have an organized, tidy, and trimmed garden or a foggy, contaminated, overgrown swamp?

Get the JIRA Strategy Admin Workbook!
This book is different – it’s not documentation. 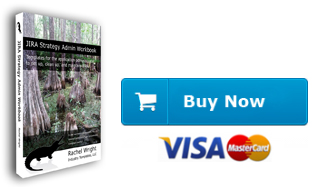